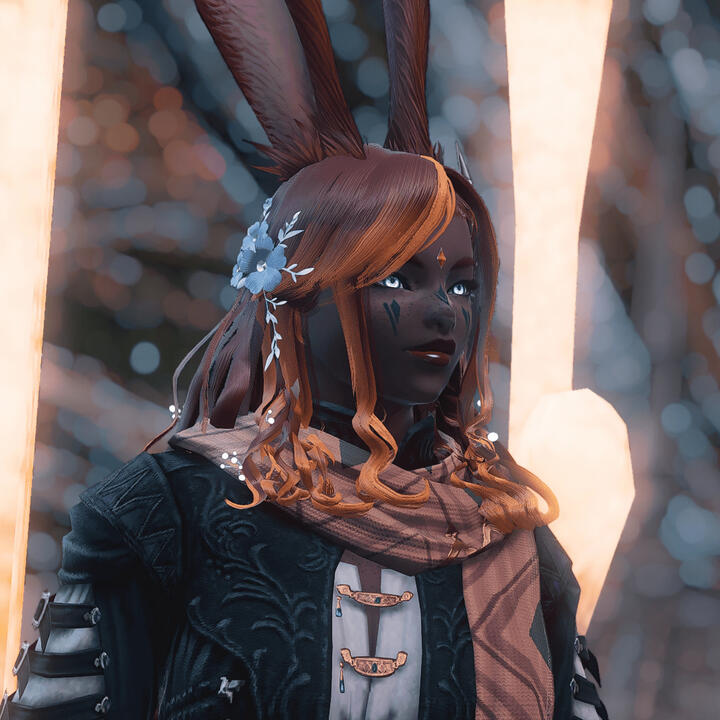 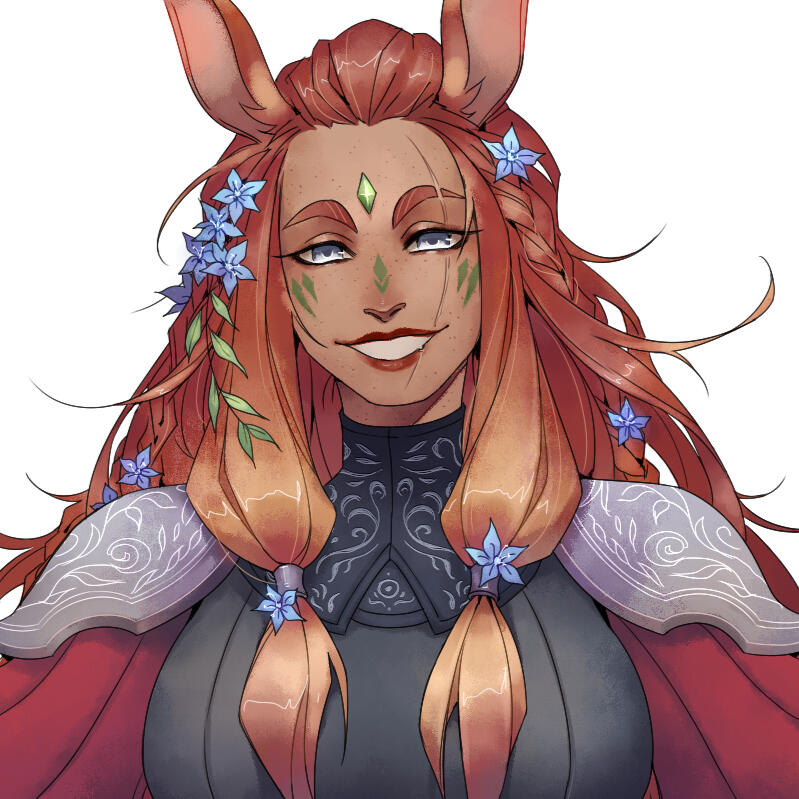 First Look || Valka is quite tall and has the muscle of a Vieran warrior, often carrying a heavy scythe and wearing armor. This intimidating figure she cuts is, however, quickly looked over in favor of her warm smile and bright silver eyes. Her face is rather hard to forget with its tattoos and the brutal scar that rends the left side of her face. She has a mane of bright red hair that seems to fade to orange and whites at the ends, often woven in complicated braids and flowers. Lately, she can be seen wearing more and more feminine clothing while out on the town. Preferring now to leave her armor at home.To Those Who Can See || Valka's aether is alive, breathing in and out as if it has grown roots into the very life of the world. It allows her various aether abilities (super strength, rapid healing, pain blocking). She is constantly expending aether and then drawing it back in from the life around her. Some have called it Vampiric in nature. Those silver eyes are bright and glowing, the original color long bleached into raw aether white.Personality || Valka is warm and welcoming, readily talking to strangers and observant of what people are willing to show. She is the best person to have in a crisis and always collected in the face of danger. Honest and loyal to a fault with an unshakable will once she's set her mind to it. 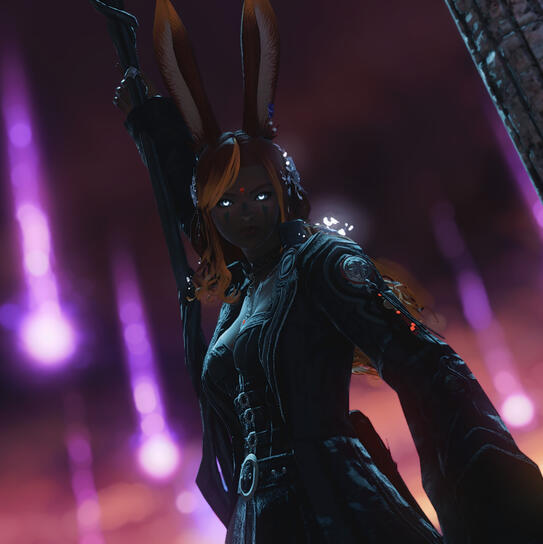 ■ Lives in Thavnair: Need a tour guide around Thavnair or someone to help you out? Valka has been working with the Radiant Host to return peace and calm to Radz-at-Han and to help repair the burned villages and forests. She's happy to show people around and keep you safe in the jungles.■ Singer and Teacher: Valka has been performing for quite some time on the stages around Eorzea. Some notable stages being the Bel Canto, the Stills and Strings, and the White Lotus. Now been hired at the Voutellievere Arts Center in Ishgard to give Violin lessons. It's a growing dream of hers to become a music teacher for voice and many other instruments. Want to learn an about music? Look her up!■ Finder of Things: This Viera is a botanist, miner, huntress. Have need of something found for a project of yours? Ask her to go look for it and she'll be happy to provide.■ Adventurer: Need a good set of muscles to hire? She's a good body to come do a job for you. She doesn't shy away from throwing her weight around or getting her hands bloody. Nor does she flinch if the job has some grey area. A constant intake and output of aether has given this Viera inhuman strength and tolerance for pain.■ Resistance: Valka fought passionately in the liberation of Dalmasca and was there when Rabanastre fell. She's been active in efforts to aid refugees from all the city-states that were affected by Garlemald and she has a big heart for fellow refugees and those in need. She's happy to lend an ear, find a kindred spirit, or offer assistance for those looking for it.■ Witchcraft: Valka knows many of the Old Words of the Wood and uses magic both of the Green and blood to cast charms, hexes, and spells. She uses runes carved into bones and stones to scry and is known to make fae pacts when cutting a deal. It has become well known to go to her for shadier needs around Thavnair.

■ I do not interact with people who use fetish, TERF, or racist language IC or OOC and I have zero tolerance for this behavior.■ I prefer in-game rp but can do discord in special cases. You can reach out on DnD status, I just won't respond until I can.■ Separation of IC and OOC is very important to me. I expect my RP partners to understand IC consequences and that my character will not act untrue to his nature for a specific outcome in a scene.■ That said: I'm big on OOC communication. We're humans behind the screen and you're not destroying my immersion by checking in if you're unsure of something.■ Please do not assault my character without OOC communication first.■ RP time is my hobby time and my goal is for it to be fun for everyone involved.■ My IRL is busy so I need to plan and schedule RP scenes in advance. Reach out anytime if you have an idea.■ I'm not comfortable writing with players or characters under the age of 21 due to the emotional maturity needed for the themes I prefer to write.